From Farmer’s Son to Flyer to Fighter 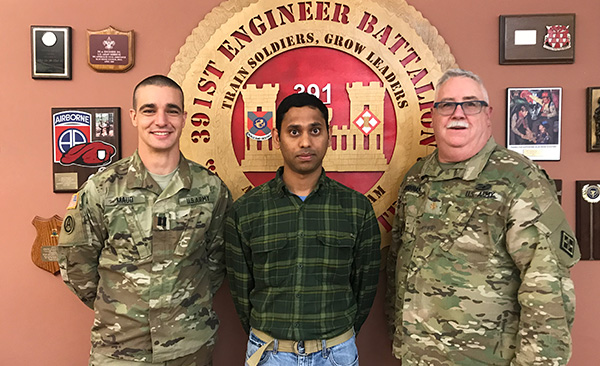 Growing up as the son of illiterate farmers in rural India, Srikanth Kodeboyina ‘11 has created his own version of the American Dream as a University of Dayton graduate engineering student, IT manager and now successful business owner. But perhaps his proudest accomplishment — his U.S. citizenship — is providing him the opportunity to give back.

“Becoming an American is a moment I’ll cherish for life,” said Kodeboyina. “I personally feel satisfied and want to thank all the University members as they have helped me accomplish my dreams. I am on my way to proving the American Dream is still alive and a Flyer made it.”

After launching a successful career and becoming a U.S. citizen, Kodeboyina enlisted in the U.S. Army reserves. His technical skill set, leadership and work ethic caused his superiors to recommend him for commission as an officer.  He will be formally commissioned as a captain or first lieutenant managing information services for the Army in the near future.

“Doing something with more impact and living a purposeful life are two reasons why I am choosing to serve,” said Kodeboyina. “Even though I have had a prosperous career, I was bored with my corporate job. Money, alone, didn’t make me feel that I was successful. Public service was always my motive.”

Although uneducated themselves, Kodeboyina’s parents invested in his education — sending him to private schools and then college where he excelled. He received his undergraduate degree in India and followed in his cousin’s footsteps to obtain a graduate degree in America.

He choose the University of Dayton because of its reputation for engineering and the recommendation of a UD grad who worked with his brother.

Kodeboyina arrived in the U.S. in 2010 and earned his master’s degree from the School of Engineering in electrical and computer engineering the following year. He was actively involved on campus as a member of the CEO club, International Students Club, IEEE and the Indian Student Association. He also took part in the UD Entrepreneurship Program.

“I owe a lot to the University of Dayton professors,” said Kodeboyina.

“I found him to be a sincere, highly intelligent, devoted and hardworking young man,” said Robert Chelle, former professor of entrepreneurship at UD.

Kodeboyina became a project manager after graduation, working for Fortune 100 companies. In 2016, he left the corporate world to devote himself to his newly launched company, Blue Eye Soft Corp.

The next year he relocated to Greenville, South Carolina, to participate in the Greenville Chamber’s Minority Business Accelerator Program. His firm now employs 18 people and offers software training, business intelligence solutions, mobile app development and many other services. He hopes to come back next spring and recruit some UD engineering and computer science grads to join his growing enterprise.

Blue Eye Soft Corp is Greenville SC based IT Software Solutions company which focuses on providing right managed services and IT solutions & Staff as per clients need.